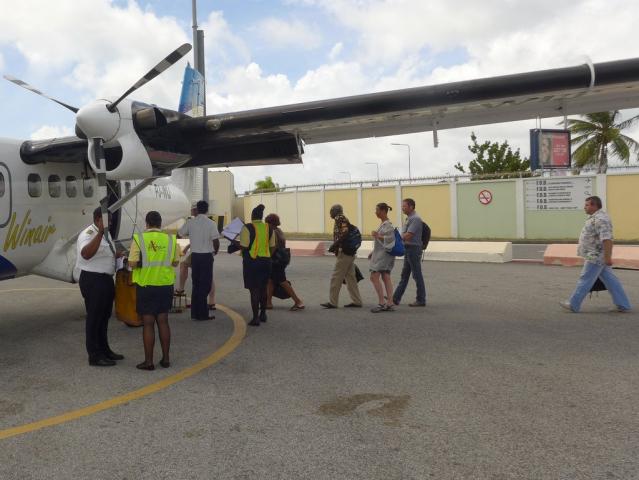 Friday was planned as a free day in the schedule of all the performances this week. We were just about to go swimming when Oral Gibbes – former student of Reint and talkshow host- called that he had spoken with Winair, the airline company that takes care of the regional flights. We were invited to make a trip to any island of our choice! If we, please, could check in at the offices of Winair at the airport at 10:30. Of course, we were happy to!

Céclila enjoyed her day at the Divi Little Bay Resort. Reint, Annelies en Joop were enthusiasticly received by mr. Michael D. Cleaver, manager of Winair. He really liked the book, and suggested a second version: The Dream of becoming a Airplane Maintenance Mechanic, because he needed them badly.

We had a fantastic day on Statia and gave books to fellow passenger Hans Stouten (from our vilage in Oosterland, Zeeland) and captain Age Brouwer of Winair, who spent his first years of flying with Pipe Dormoy.

Back at St. Maarten we picked up Cécilia and went to the BBQ of SXM Princess Juliana Airpoty at Greatbay Philipsburg. What a day!